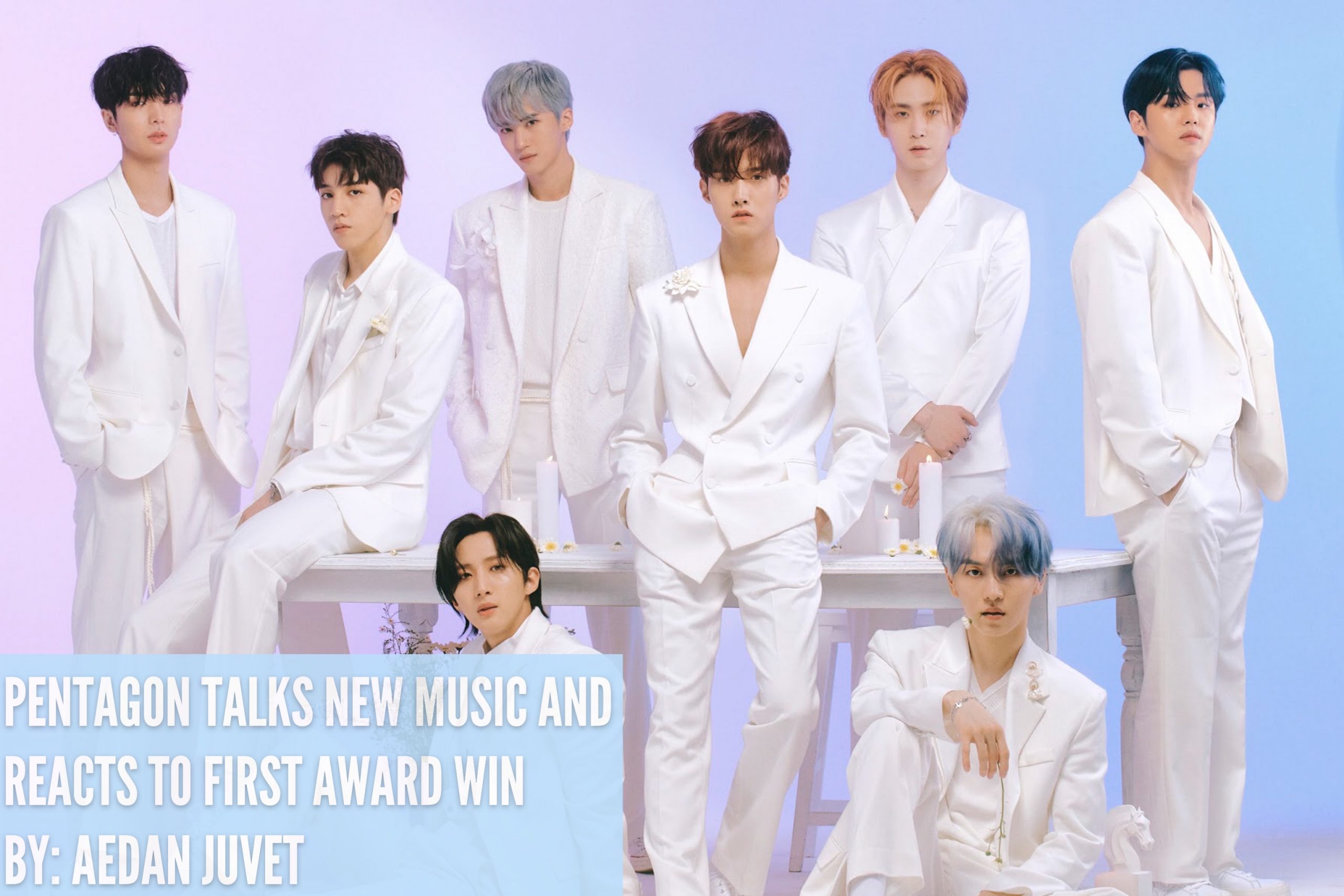 In four years, the skilled performers that make up the dynamic group PENTAGON have released a solid 10 EP’s, with a remarkable level of technicality. In that short amount of time as an active group, they’ve amassed nearly 500 million views on Youtube, and 1.5 million monthly listeners on Spotify alone, a testament to their collective talent. The singers, dancers, and songwriters are certainly no strangers to hard work, but their recent 10th EP titled [WE:TH] helped the group of compassionate performers earn their first highly coveted music show award in South Korea since debuting. The group (made up of Kino, Wooseok, Yuto, Yanan, Hui, Hongseok, Shinwon, Yeo One, and Jinho) graciously accepted the award for their comeback song “Daisy,” an impeccable selection across an EP filled with tracks that display growth for a group that has consistently proven their talent since debuting in early 2016.

With a new successful EP that the group has been heavily involved in writing and their first big win, the group is in a strong place where their audience (Universe) is expanding around the world, and the appreciation for Pentagon is a silver lining to a universally difficult year. Though the group is in a solid professional spot, the absence of the group’s ninth member Jinho (due to military service) is felt by the brotherhood of performers — but thankfully his musical contributions are still present in the EP.

Despite the temporary shift, the group has rallied to deliver some of their best music yet and makes it clear that this is just the beginning of Pentagon as we know it. We recently spoke to Pentagon regarding the release of [WE:TH] where the influential artists opened up about inspiration, Jinho, songwriting, and more.

“Daisy” was instantly my personal favorite, and it’s an excellent way to kick off the album! What was it about that song in particular that made you choose it as the lead single?

HUI: We chose “Daisy” as our title track not only because it well-symbolized the type of music we wanted to show overall, but also because it really showed the mature side of PENTAGON.

WOOSEOK: We really liked what the daisy flower symbolized. There were a lot of concepts and stories we could make out of the meaning of daisy, so we had fun working around them.

[WE:TH] Is your 10th EP, and that’s a major accomplishment, so congratulations on that milestone! When you look back on your experience as a group, what has been the biggest lesson you’ve learned together?

HONGSEOK: As a group, I think it’s most important that we have a strong bond together.

YEO ONE: To know how to enjoy being on stage!

Something I respect that you’re all extremely hands-on with your music. In addition to providing vocals, WOOSEOK, HUI, KINO, and JINHO craft some incredible music on the EP. What was the proudest moment for you while composing [WE:TH] ?

HUI: The proudest moment for me was seeing our title song “Daisy” being loved and praised by the public.

KINO: When JINHO heard the entire album for the first time, he was like, “These songs are so good, I wonder who wrote them.” That is when I thought that this album isn’t the kind of album that sounds good just among the team, so I felt relieved and proud.

WOOSEOK: When writing “Nostalgia” I thought of the memories we had since last year’s world tour until now. I felt proud that I was able to express the things I’ve learned and the emotions I felt in a song.

Considering that JINHO is currently not able to participate due to his service — what was it like being able to share such a sweet message with “I’m Here” on his behalf?

HUI: Above all, it was nice to hear JINHO’s voice. It was really touching to know how JINHO felt towards UNIVERSE and PENTAGON members.

YEO ONE: I’ve heard that JINHO wrote this song to express his gratitude, love, and all kinds of feelings he has for UNIVERSE. I also hope to write a song for UNIVERSE if I have to leave for military service.

YANAN: Since JINHO isn’t with us at the moment, it was nice to hear his voice. It really made me miss the five years we spent together.

YUTO: I think he really worked hard to deliver how he felt about not being able to meet UNIVERSE. We’re very happy to have his song on this album!

KINO: Because JINHO wrote the song for the members and the fans, we couldn’t listen to it until the album was officially released. By the time we first listened to it we were really missing him, so the song felt even more heartwarming.

The album has a lot of heart and soul put into it, with heartbreak being a major theme. Was it almost therapeutic to put those emotions into your music?

YEO ONE: Since we are the singers, we do have to be the ones to empathize with these songs the most. We did find ourselves relating to these stories and felt a bit heartbroken.

“Paradise” is another fun track, and I read that you wanted to bring in an early ’00s sound but with a PENTAGON flare. When you started working on the EP, did you have a clear idea of where you wanted to go, or was it something that was more spur of the moment?

KINO: We set the theme that way even before we started working on the track, which I think is why it turned out the way we wanted it to be.

WOOSEOK: We had that goal in mind since the beginning of the songwriting process, and working on “Paradise” made us feel as if we’ve turned back time. I had a lot of fun writing the lyrics.

Is there one song on [WE:TH] that you each currently find yourselves listening to more than the others?

YANAN: KINO’s song “Beautiful Goodbye.” His songs have my kind of vibe.

YUTO: I’ve been listening to WOOSEOK’s song “Nostalgia” a lot!

You have a concert coming up next month, and fans are so excited to see you perform together again! Can you give us any hints about what we can expect?

YEO ONE: We’re preparing a wide range of performances. You will be able to see lots of chill and fun stages in PENTAGON’s very own style, so please look forward to them!

YANAN: You will notice that I’ve improved. Upgraded YANAN!

I’ve seen that a few of you are anime fans, and as an anime fan, I like to make it a habit to ask what would be one series that is either a favorite or something you’d recommend?

YUTO: My favorite is Demon Slayer!

KINO: I like Howl’s Moving Castle, My Neighbor Totoro, and Your Name!

I truly respect your artistry and I have to tell you, this album feels extremely raw and personal. What’s the one thing you’d like to convey to your fans with [WE:TH] ?

HUI: Our goal is to show how PENTAGON has matured and improved.

HONGSEOK: Some of the things we would like to convey are PENTAGON’s maturity and a little more relaxed music. We worked on this album with a bit more laid-back attitude.

YANAN: I want our fans to see how I’ve grown.

You’ve recently had your first win on a music show with “Daisy,” and it was a well-deserved achievement! What was that moment like?

PENTAGON: Thank you so much. That night we finally got to call ourselves a “first place artist” and call UNIVERSE “fans of a first-place artist” was the happiest, the most grateful night of our lives. We want to tell UNIVERSE that we love them and thank them for being our backbone for more than four years of time. It feels like Act 2 has just begun for PENTAGON. We will do our best to give UNIVERSE a dozen times the love we received from them. Our goal is to keep going up until we reach the sky.

Pentagon’s new album [WE:TH] is available now, so make sure to check it out!